The Tyndale House Greek NT is available at STEPBible.org and it is well worth using. It seeks to be the most accurate representation of the original Greek text.

The editors are Drs Dirk Jongkind and Peter Williams, with support from other Tyndale scholars. The principles behind it are:

* concentrate on the text in the earliest manuscripts 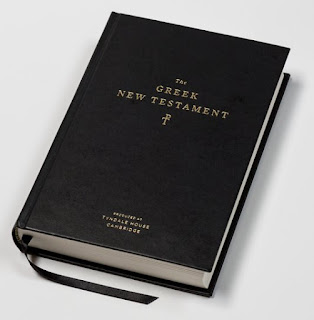 The last point is extremely important, and represents Dirk Jongkind's particular expertise. His doctoral studies found that the individual scribes made different types of mistakes and different decisions when they found apparent errors in manuscripts they copied from. By treating each scribe and manuscript individually, the history of differences in manuscripts can be unraveled more securely.

They also have a different emphasis when looking for the reason behind changes. When a scribe fails to copy a text exactly, it might be due to his error, or because he thinks the previous scribe made an error in the manuscript he is copying, or because he thinks he can improve the text in some way. The improvements may be minor  - such as changing the order of the words or their spelling - or it might be more serious such as adding details from a parallel gospel, removing ambiguities or (as some scholars claim) to make the text conform with accepted theology.

Jongkind concluded from his research that most errors are due to human error. The Tyndale House Greek NT is therefore edited on the assumption that differences are more likely to be accidental than intentional.

Comparisons with other Greek NT editions produce some surprising conclusions. We now have three widely used modern editions: the NA/UBS texts (which keep in line with each other), the SBL GNT, and the new Tyndale House GNT. Each of these  give different emphases to the reasons for scribal changes, and assign different weight to the various sources for the text. The surprise is how similar they turn out to be. There are, of course, thousands of changes, but the vast majority of these are very minor - spelling and punctuation differences, pairs of words in reverse order, or slight grammatical differences that make no difference to the meaning. Even among the minority of places where the meaning of the text is different, these never result in a change to the basic message.

One conclusion we can draw from this surprising similarity is that we can now be sure what the earliest Greek NT looked like. It is as if three teams of transcribers took a bundle of handwritten documents and all produced similar texts. In other words, the three projects have ended up confirming each other.

The easiest way to see this text is at STEPBible.org where you can display the THGNT beside the SBLG module, and see the differences with the NA text in the footnotes.

See the THGNT at www.stepbible.org/?q=version=THGNT

The printed edition has an apparatus that deals with all the important variants and one surprise is how few there are. The production quality is superb - you might drop a hint that you'd like it as a gift!

This new edition shows us that the scholarly pursuit for the text behind all the scribal differences has been a success. And the Tyndale House edition has reversed all the 'improvements' by later editors who corrected spelling and changed punctuation and paragraph breaks. We can now read the NT in its earliest form.