A good lexicon can open up the Bible in unexpected ways. The Full Liddel-Scott-Jones Greek lexicon (LSJ) is the most comprehensive guide available for ancient Greek. The version at www.STEPBible.org is much easier to use than the printed version.  (see a comparison here).

We'll be celebrating Palm Sunday soon, and LSJ provides some interesting insights into this.

STEPBible can help you visualise the scene by understanding the nuances of what the Gospel writers were trying to convey. One thing that stands out is their strange choice of vocabulary.

When you read it in STEPBible, and hover over the word "spread" it tells you something about the materials they spread out for Jesus' donkey to walk on. Matthew and Mark used στρώννυμι (strōnnumi) which is a strange choice because it generally refers to spreading covers on a bed or a couch.

There were other words that would have fitted better. They could have used ἐπιβάλλω (epiballō) “to spread [a covering]” as when you spread a cloth over a table,  (LXX Num.4.7) or over an altar (Num.4.11,13) or a cloth over the whole Tabernacle (Num.4.6). Or they could use διαστρώννυμι (diastrōnnumi) ‘to spread [flooring]’ which is used when spreading carpets on the ground (1Sam.9.25). Or there was even the word διαπετάζω? (diapetazō) “to spread out”, implying that the item was folded (as when a well-hole was hidden by a covering in 2Sam.17.19). Or  ἀναπτύσσω (anaptussō) ‘to unroll’ which was used when Gideon spread his cloak on the ground to collect all the gold ear-rings from the spoils of their battle (Judg.8.25). All of these were suitable for spreading something on the ground or over other surfaces, so why choose something that always implies a bed or a couch? 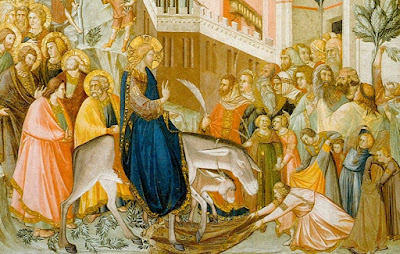 If you look at how strōnnumi is used in the NT and LXX, it is clearly restricted to covering a bed ready for sleeping in, or a couch ready for dining in the Roman fashion (which Jews deliberately copied at Passover). It is used once of a woman in Ezek.28.7 but the context makes clear that she is being spread out to be ‘bedded’ by soldiers.

We could note the link with Passover couches and leave it there, but the original readers would have seen much more.

If you click on the word "spread", you can see the entry in Liddell+Scott+Jones. This not only takes data from the Bible, but the whole breadth of ancient Greek literature, so it often gives insights that normal Bible lexicons don't have. You'll see a long definition, but go to the end - to the "Related words" and click on "a strewn bed (στρωμνή)". This will take you to the entry:

The clue into what the Gospel writers expected their readers to understand lies at the end of this entry – the "lectisternium". A quick look at the Wiktheipedia entry will tell you that this is the ancient Roman way to placate the gods. They spread fine cloths on couches and put them in the streets to make t

he gods welcome, especially at times of crisis, though this also developed into regular festivals. They also did it during Triumphs, when a conquering general marched through the city showing off his captives and trophies.

The crowds were welcoming Jesus like a god or a conquering hero. This wasn’t a preacher’s welcome. It was a welcome fit for a king or a god.

This is something that would be obvious to the original readers, but we don't 'get' it unless we use tools like STEPBible. Other Bible lexicons don’t have this detail, because they neglect literature outside the Bible. And this means that the commentaries tend to miss this too.

Why don't more people use the LSJ lexicon?  Because till now it has been difficult to read and difficult to link up with the Bible.

If you compare the normal LSJ entry, you can see that STEPBible has explained the incomprehensible abbreviations, tidied all the bibliographic details into hover-helps, and then added the date of the earliest of the authors for each example. Another problem using the LSJ is that the NT spells the word differently, so the correct entry is difficult to find. However, there's no problem if you use STEPBible because this has already linked to the correct entries in LSJ for the words of the NT and Septuagint.

With www.STEPBible.org we have easy access to the best classical Greek lexicon for even deeper Bible studies.